<p><b>The fourth novel of the galaxy-spanning Sun Eater series merges the best of space opera and epic fantasy, as Hadrian Marlowe continues down a path that can only end in fire. </b></p><p>Hadrian Marlowe is trapped.</p><p>For nearly a century, he has been a guest of the Emperor, forced into the role of advisor, a prisoner of his own legend. But the war is changing. Mankind is losing.</p><p>The Cielcin are spilling into human space from the fringes, picking their targets with cunning precision. The Great Prince Syriani Dorayaica is uniting their clans, forging them into an army and threat the likes of which mankind has never seen.</p><p>And the Empire stands alone.</p><p>Now the Emperor has no choice but to give Hadrian Marlowe – once his favorite knight – one more impossible task: journey across the galaxy to the Lothrian Commonwealth and convince them to join the war. But not all is as it seems, and Hadrian's journey will take him far beyond the Empire, beyond the Commonwealth, impossibly deep behind enemy lines.</p>

<p>The fourth novel of the galaxy-spanning Sun Eater series merges space opera and epic fantasy, as Hadrian Marlowe continues down a path that can only end in fire.</p>

<b>PRAISE FOR THE SUN EATER SERIES</b>: <br />
'Space opera fans will savor the rich details of Ruocchio's far-future debut, which sets the scene for a complicated series... Readers who like a slow-building story with a strong character focus will find everything they're looking for in this series opener' <i>Publishers Weekly</i>. <br />
'With the scope of <i>Dune</i> and a confessional, first-person voice that puts us into the mind of a possible madman, this is space opera at its most riveting and grandiose' 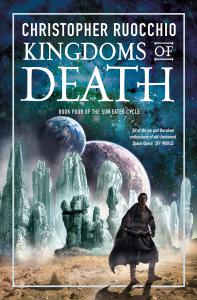 <p>Book 4 in a critically acclaimed series from a talented new voice in the SFF community.</p>