<p><b>'An eloquent, forensic examination of resurgent English nationalism as the force that has driven Brexit and may now break up the United Kingdom'</b> Jonathan Coe</p><p><b>'A fascinating book that draws on poetry, literature and on-the-ground reporting'</b> <i>The Times</i></p><p><b>'A wonderful book which will be quoted in years to come'</b> <i>New European</i></p><p>In the past, it was possible to live with delightful confusion: one could be English or British, Scottish or Irish, and a citizen/subject of the United Kingdom (or Great Britain). Now this archaic state is coming under terrible strain. The English revolt against Europe is also a revolt against the Scottish and Irish, and the pressures to declare Scottish independence and to push for a border poll that would unite Ireland may become irresistible.</p><p>Can England and Wales find a way of dealing with the state's new place in the world? What constitutional, federal arrangements might prevent the disintegration of the British state?</p><p><b><i>How Britain Ends</i> is a book about history, but also about the strange, complicated identity of Britishness.</b></p>

<p>A book about the rise of English nationalism and the impending breakup of the United Kingdom. </p>

'A wonderful book which will be quoted in years to come'

'A fascinating book that draws on poetry, literature and on-the-ground reporting'

'A cool-headed contribution to this often emotional debate'

'An eloquent, forensic examination of resurgent English nationalism as the force that has driven Brexit and may now break up the United Kingdom'

'In the coming years, many people will be writing about the end of the UK. They'll all quote this wonderful and curiously moving book. I know I will'

James Hawes, author of The Shortest History of England

'A former BBC journalist, [Esler] has travelled round the UK as intensively as anyone, and he is deeply worried about what he sees as the collapse of the British idea and the emergence of English nationalism. As Esler sees it, the unruly, destructive force of English nationalism now threatens to break the United Kingdom, heralding, as his subtitle has it, the 'rebirth of four nations' ... The present government has no zest for genuine reinvention, because it refuses to recognise that there is anything much to worry about. And as Esler insists, recognition is the necessary first step to reform'

'Both timely and provocative'

'His book is intelligent, interesting ... This is a good book and a valuable one'

'A consistently thought-provoking and well-argued book, and yet the more I read it, the more I wondered about English nationalism'

'Timely and incisive ... Gavin Esler dispels the myth that delivering a Brexit deal, or no deal, would being an 'end' to Brexit'

'Everything a good Remainer needs to persuade the Brexiters, punchy, pithy and short'

'If you want a pithy, sober, clear-headed summary of what Brexit is actually likely to look like, Gavin Esler's new book is spot on. Such a welcome antidote to all the whipped-up sentiment – calm, factual, rigorous'

'A brilliant demolition of the lies and liars that created the Brexit mess. Should be required reading at his old stamping ground, the BBC'

'An important book ... [Esler] writes a clear, stimulating description of our position following our departure from the European Union' 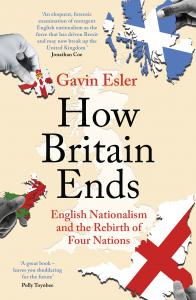 <p>Gavin Esler is a well respected journalist and a former main presenter of Newsnight for twelve years. </p>

<p>The question of the unity of the United Kingdom is one that continues to regularly provoke conversation. </p>

<p>Author is very well connected and has an engaged following of almost 100,000 on Twitter. </p>