<h2>A satirical fable, a political allegory and an ecological warning from the author of <i>The Three-Body Problem</i>. </h2><p>In a sunlit clearing in central Gondwana, on an otherwise ordinary day in the late Cretaceous, <b>the seeds of Earth's first and greatest civilization were sown in the grisly aftermath of a Tyrannosaurus' lunch. </b></p><p>Throughout the universe, intelligence is a rare and fragile commodity – a fleeting glimmer in the long night of cosmic history. <b>That Earth should harbour not just one but two intelligent species at the same time, defies the odds. </b>That these species, so unalike – and yet so complementary – should forge an alliance that kindled a civilization defies logic. But time is endless and everything comes to pass eventually... </p><p>The alliance between ants and dinosaurs, was of course, based on dentistry. Yet from such humble beginnings came writing, mathematics, computers, fusion, antimatter and even space travel – a veritable Age of Wonder! But such magnificent industry comes at a price – a price paid first by Earth's biosphere, and then by all those dependent on it. </p><p>And yet the Dinosaurs refused to heed the Ants' warning of impending ecological collapse, leaving the Ant Federation facing a single dilemma: <b>destroy the dinosaurs, destroy a civilization... or perish alongside them? </b></p>

<p>The alliance between ants and dinosaurs created a veritable Age of Wonder! But such magnificent industry comes at a price - a price paid first by Earth's biosphere, and then by all those dependent on it. A satirical fable and ecological warning.</p>

'So, so readable, <i>Of Ants and Dinosaurs</i> with the lightest and brightest of touches, made my brain itch with its creativity and klaxon alarm ... Deceptively simple and brilliantly clever, I simply adored it'

'An allegorical tale of the civilisation that flourished on the Earth in the late cretaceous period ... Written in a fun and informal style ... Enjoyable for adults who are looking for a light-hearted and fast-paced read ... [Cixin Liu paints] a wonderful picture of this advanced civilisation that conquered the world in the unimaginable past ... We can all see where it's heading, after all, there are no dinosaurs here today driving round in building-sized cars. The ending will not come as a surprise, but it's surprisingly poignant to see the results of the ants and dinosaurs' continual disagreements come to a head'

'The narrative picks up towards the end, propelling us into the atomic age and passages of visionary goofiness'

'[A] rather light and playful piece ... Liu's sense of fun is contagious ... For younger readers, thought, it might well offer some useful insights into that era and what caused their grandparents to lose so much sleep back in the 1950s'

'A comprehensive vision of civilization and its development paths. When reading this story (or maybe more accurately: a fairy tale), one has an overwhelming impression that you are reading about the current situation in the world' 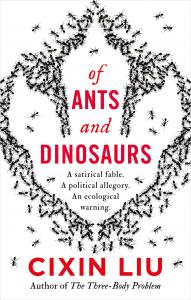 <p>Liu is the winner of the 2018 Arthur C. Clarke Award for Imagination in Service to Society. </p>

<p>Author of the first ever translated work to win a Hugo Award. </p>

<p>One of the world's most important SF writers moves into top gear with a playful but intelligent tale of a world brought to the edge of catastrophe by cultural distrust, political expediency, technological over-reach and ecological vandalism. </p>