<h2>Three years in the troubled British Isles from the bestselling author of <i>Heroic Failure</i>. </h2><p>In 2011 Queen Elizabeth made her first ever state visit to the Irish Republic. It was a great, moving occasion. In settling once and for all its relationship with Ireland, Britain was also settling its relationship with the rest of the world, taking its place as a normal, equal democracy. It was not to last.</p><p>Then came the 2016 referendum, and so began</p><h2>Three Years in Hell</h2>

<p>Three years in the troubled British Isles, leading up to the election of Boris Johnson. </p>

'Fintan O'Toole's important account of three turbulent Brexit years is of both historical significance and contemporary relevance ... It will both inform and entertain'

'O'Toole is a pitiless and humourful analyst, and <i>Three Years in Hell</i> is packed with uncommon insights' 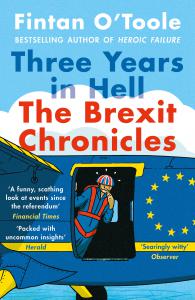 <p>HEROIC FAILURE was critically acclaimed and has sold more than 50,000 copies. </p>

<p>Britain and Ireland stand on the brink of a chaotic exit from Europe, and this book chronicles the ridiculous and often worrying steps along the way. </p>

<p>Passionate, urgent, vital writing about a subject that normally reduces people to tears of boredom. </p>