<p>The first in a dazzling, commercial, historical adventure series set in the extravagant and deadly world of the French Revolution. A whirlwind of action, science and magic reveals, with a diverse cast of fearless heroines, a band of rebels like no other.</p><p>Camille, a revolutionary's daughter, leads a band of outcasts – a runaway girl, a deserter, an aristocrat in hiding. As the Battalion des Morts they cheat death, saving those about to meet a bloody end at the blade of Madame La Guillotine. But their latest rescue is not what she seems. The girl's no aristocrat, but her dark and disturbing powers means both the Royalists and the Revolutionaries want her. But who and what is she?</p><p>In a fast and furious story full of the glamour and excesses, intrigue and deception of these dangerous days, no one can be trusted, everyone is to be feared. As Camille learns the truth, she's forced to choose between loyalty to those she loves and the future.</p><p>Perfect for fans of Netflix's Shadow and Bone series.</p>

<p>The first in a historical adventure series set in the extravagant and deadly world of the French Revolution. A whirlwind of action, science and magic reveals, with a diverse cast of fearless heroines, a band of rebels like no other. </p>

'Kat Dunn's captivating debut [...] is part steampunk adventure, part historical thriller ... An enthralling, fast-paced adventure with a cast of likeable characters; Camille's relationship with her lover Ada is particularly well drawn. There's a neat denouement and the promise of sequels'

'Dark, deadly and delicious. A thrilling adventure set in a lavish but ruthless world, with a spirited cast of characters you will root for instantly'

'The deadly world of the French Revolution gets a fantastical twist in the first of a new series following a diverse band of fearless rebels. Wonderfully atmospheric fill of strange science, mysterious powers and fearless heroines'

'The characters are well drawn and each one feels fully fleshed-out ... so while this adventure is complete in itself, you'll look forward to the next in the series'

'A fascinating and exciting mixture of history and magic/fantasy ... The book brings a real feel of the period and there are echoes of titles such as <i>A Tale of Two Cities</i>, <i>Jonathan Strange and Mr Norrell</i>, <i>The Red Necklace</i>, and even <i>The Scarlet Pimpernel</i>. Altogether this is an exciting and challenging read for those who love history, with a touch of magic'

'The writing is lavish and richly evocative of a restless country, teetering between exultation and protest. Wonderfully diverse and effortlessly memorable ... There's a gorgeous queer romance at the centre of it, but that's just one of a variety of brilliantly rendered relationships [...] all brought to life by consistently sharp and entertaining dialogue'

'A fascinating piece of historical fiction with a supernatural twist ... The book begins with a detailed and thrilling account of a rescue mission, and from this explosive opening Dunn piles on the intrigue and excitement ... Dunn's cinematic storytelling makes the story zip along, as she combines horror, magic, science, romance and politics to startling effect. This entertaining slab of historical fiction is perfect for older readers who love to dive deep into a book and not surface until it's finished'

'Definitely a rollicking caper with a dark edge. It's fast and fun, and its central relationship is an interesting exploration of a committed queer relationship'

'What more could you want the fast-paced, adventure of a ragtag group of flawed, loveable disasters in the French Revolution? A vivid thrill of a book, and highly recommended!'

'Intricate, vivid and electrifying, Dunn's fantastical portrait of revolutionary Paris is one of the most (literally) explosive debuts I've ever read'

Laura Steven, author of The Exact Opposite of Okay

'Dangerous is apt for Dunn's stunning debut; not only does it encapsulate her execution of the narrative, the inspiration from France's Reign of Terror, but it foreshadows the fact that <i>Dangerous Remedy</i> is only the beginning for this daring and talented author'

'Kat Dunn has crafted a fast-paced adventure with stunning characters trying to save themselves – and others – from a society shattered into treachery and bloodshed. A fantastic blend of science and history, this portrait of Revolutionary-era Paris is impossible to put down, with a relationship at the heart of it that you desperately root for'

Helen Corcoran, author of Queen of Coin and Whispers

'An intelligent, lush and rollicking opener to what promises to be your new YA obsession. Vivid, dark, and complex – I fell under <i>Dangerous Remedy</i>'s spell from the very first page'

Kiran Millwood Hargrave, author of A Secret of Birds and Stone

'The perfect blend of historical head-chopping and fantasy feuding. Throwing together the intrigue of the historical French setting and the glimmer of Dunn's fantastical alternative imagining, <i>Dangerous Remedy</i> is a thrilling tale of revolutionaries who are on their own side, with a vein of dark romance running through it'

'A gripping adventure of daring escapades and dazzling set-piece scenes. Between these pages you'll find heart-pounding romance, wit, trickery, danger and a uniquely brilliant kind of magic – all set against the expertly conjured backdrop of revolutionary France. You'll love it'

Kesi Lupo, author of We Are Bound by Stars

'A swashbuckling thrill ride of a debut with protagonists who'll have you on the edge of your seat. This is life or death stuff!'

'Readers will lose their heads over this blisteringly paced rollercoaster ride through the French Revolution, with lashings of lust, love, sacrifice, betrayal, and horror'

Mel Salisbury, author of Hold Back the Tide 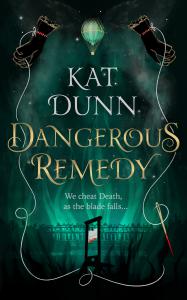 <p>Author well-connected and active in the YA community and on social media.</p>