<h2>'An ambitious, riveting and essential book that has much to teach us about the recent history of this region, and about the human impulse towards populism that continues to shape the world' <b>Ben Rhodes</b>, bestselling author of <i>The World As It Is</i></h2><p><b>'A REVOLUTION IS A STRUGGLE TO THE DEATH BETWEEN THE FUTURE AND THE PAST.' FIDEL CASTRO</b></p><p>For more than six decades, Fidel Castro's words have echoed through the politics of Latin America. His towering political influence still looms over the region today.</p><p>The swing to the Left in Latin America, known as the 'Pink Tide', was the most important political movement in the Western Hemisphere in the 21st century. It involved some of the biggest, most colourful and most controversial characters in Latin America for decades, leaders who would leave an indelible mark on their nations and who were adored and reviled in equal measure.</p><p>Parties became secondary to individual leaders and populism reigned from Venezuela to Brazil, from Central America to the Caribbean, financed by a spike in commodity prices and the oil-backed largesse of Venezuela's charismatic socialist president, Hugo Chávez.</p><p>Yet within a decade and a half, it was all over. Today, this wave of populism has left the Americas in the hands of some of the most authoritarian and dangerous leaders since the military dictatorships of the 1970s.</p>

<p>An exploration of the phenomenon of the caudillo figure in Latin American politics and the rise of populism through the modern histories of the continent. </p>

'An ambitious, riveting and essential book that has much to teach us about the recent history of this region, and about the human impulse towards populism that continues to shape the world'

Ben Rhodes, New York Times bestselling author of The World As It Is

'A tour-de-force of reportage and analysis that makes sense of historic, complex forces that shook Latin America ... A lucid, important book'

'A valuable and timely guide ... Grant's <i>¡Populista!</i> describes how the playbook of charismatic autocrats and chronic cronyism can unfold anywhere'

John Paul Rathbone, author of The Sugar King of Havana

'Will Grant writes with close knowledge, admirable balance, and the verve of a natural storyteller. A must-read for today's volatile world'

'Will Grant is one of the BBC's great scholar-correspondents, and without peer when it comes to explaining Latin America. In <i>Populista</i>, he marries the depth of knowledge of a fine historian, with the elegant storytelling of a gifted journalist'

'The best piece of non-fiction writing on Latin America that I have read in a long time. Will Grant meets everyone from presidents to the impoverished, and explains it all beautifully'

'Will Grant has written an elegant and vivid account of Latin America's strongmen that radiates from the pages like bursts of Cuban sunshine. He skilfully weaves together reportage, startling modern history, and his own personal testimony, to chart the rise to power of some of the most brutal, but fascinating, authoritarian leaders of modern times. He invites us into a world of dripping jungle hideouts, dusty urban warfare. At times, it is as if the reader has slipped into the pages of Gabriel Garcia Marquez'

'Action-packed with a large cast of characters, but Grant's lively style never sags under the weight of the detail he manages to pack into the book'

'Grant expertly traces how the actions and views of his subjects played out on ordinary lives, for better or worse, from women like Cristina Chuquijanca de Soria, 'Maduro diet' of inflation and food shortages under the country's current president'

'Grant's reporting is detailed and enlightening. He puts the leaders and their reigns in their historical context while asking the movements they fronted worked'

'The portraits of each character (which Grant calls 'Shakespearean' and 'colorful') are very interesting, with a lot of historical and personal information ... It provides tools which allow the reader to accept or refute the author's positions in the preface and in the epilogue with numerous arguments and good information ... An enjoyable read and highly recommended for those who wish to understand Latin America' 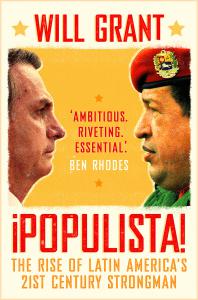 <p>Author is one of the UK's leading broadcast journalists on Latin American affairs, based in Havana and Mexico City. </p>