<h2>A riveting study of Africa's demographics – its youth and growth – and what they mean for the continent, today and into the future.</h2><p><b>'The population surge in Africa since the 1950s is as fascinating as it is jaw-dropping... The consequences may defy prediction with any degree of certainty, but there can be no doubt that they will be momentous.' Edward Paice, Director of Africa Research Institute</b></p><p>Africa's population growth in the last 50 years has been unprecedented. By mid-century, the continent will make up a quarter of the global population, compared to one-tenth in 1980. By the end of the century, the proportion could be as much as 40 per cent. This is a mega-trend that should not be ignored.</p><p>Africa's youth is the most striking aspect of its demography. As the rest of the world ages, and the population of many countries starts to shrink, almost 60 per cent of Africa's population is younger than 25 years old. This 'youthquake' will have immense consequences for the social, economic and political reality in Africa.</p><p>Edward Paice presents a detailed, nuanced analysis of the varied demography of Africa. He rejects the fanciful over-optimism of some commentators and doom-laden prophecies of others, while scrutinising received wisdom, and carefully considering the ramifications of the youthquake for Africa and the world.</p>

<p>A study of Africa's demographics – its youth and growth – and what they mean for the continent, today and into the future.</p> 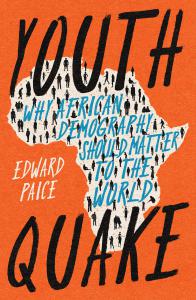 <p>Features a number of graphs and charts to illustrate the trends discussed in the book.</p>