<p><b>Dido is the only girl ever to have raced to victory at the Circus Maximus, Rome's greatest sporting arena. Now she and her beloved horse, Porcellus, are in hiding, and the Emperor Caligula has put a price on their heads. </b></p><p>Can she outwit the emperor and his bounty hunters? And will a shocking family secret stop her in her tracks, or spur her on to make a daring return, helped by a one-eyed mare with a heart as brave as her own?</p><p>Horses, history, mystery, thrilling entertainment and sensational storytelling race neck and neck through the second pulse-pounding adventure in Annelise Gray's 9+ series set in Ancient Rome.</p><p><b>'I loved this adventure – full of brilliant horses, and a determined heroine following her dreams against all the odds. Looking forward to discovering what's in store for them next' Pippa Funnell, MBE, three-time Equestrian Olympic medalist </b></p>

<p>The second in the Circus Maximus adventure series. Dido is the only girl ever to have won victory at the Circus Maximus, but it comes at a price. Emperor Caligula is intent on wreaking revenge, and the whole Empire wants to know her true identity.</p>

<b>PRAISE FOR <i>CIRCUS MAXIMUS: RACE TO THE DEATH</i></b>: <br />
'This thrilling debut is the first in a new historical series full of dazzling action, rich detail, fabulous horses and an unforgettable heroine' Fiona Noble, <i>The Bookseller</i>. <br />
'Fantastic new historical novel that I'm reading to my daughter. She's loving it... We are hoping there's a sequel!' Dan Snow. <br />
'Rich in period detail, with a few real historical characters – its principal invention the idea that a woman might have been a charioteer – this is an involving, well characterised tale that feels original' <i>Sunday Times</i>, Children's Book of the Week. <br />
'<i>Circus Maximus</i> swept me away to ancient Rome and I didn't want to come back. What a thrilling historical adventure!' A.M. Howell, author of <i>The Garden of Lost Secrets</i>. <br />
'Full of great characters – both horses and humans – and Dido is a terrific heroine... Annelise Gray has written a story that is both historically convincing and heart-stoppingly exciting. I hope there are more to come' 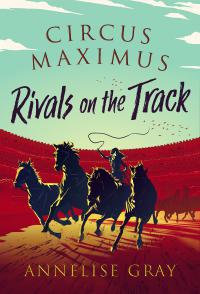 <p>Ancient Rome is on the curriculum. Perfect for horse lovers, history lovers, children, teachers and parents. Classicist author trained under Mary Beard and has appeared on TV and radio.</p>