<p>One of Ireland's most celebrated writers, musicians, and poets, Ciaran Carson was born in Belfast and has spent his life there. In <i>The Star Factory</i>, he makes himself the cartographer of his home city's spaces, symbolic and literal, the scribe of its byways and avenues, from Abbey Road to Zetland Street. </p><p>Belfast has seen transformation: once the fifth-greatest industrial city in the world, the home of the S.S. <i>Titanic</i>, it has more recently been a battleground of sectarian slaughter. To conjure up the lives lived there, Carson plunges down the 'wormhole of memory' – admiring along the way the strata and roots beneath the surface. Though it has experienced more than its share of urban decay – the Star Factory of the title is an abandoned mill – Carson's Belfast teems with stories, stories that can spring from a telephone directory, a cigarette case, a postcard, a book about tramways, a stamp. For the eye that knows where to look, and the ear that can listen, gems and melodies are everywhere. </p><p><i>The Star Factory</i> is an elegy of magical power and enduring love, a work of passion and precision, and sure to be considered one of the finest books about Ireland ever written. </p>

<p>Ciaran Carson was born in Belfast and has spent his life there. In this memoir, he makes himself the cartographer of his home city's spaces, symbolic and literal, the scribe of its byways and avenues. </p>

'<i>The Star Factory</i> is a splendid read, packed with wonderful reminiscences of old Belfast ... It is highly recommended'

'In <i>The Star Factory</i> Carson is still playing Soldiers and Rebels, he is still a boy listening to his father's stories ... The best parts of the book are those in which he gives himself over to nostalgia, evokes the smell of his father's postman's bag, his voice, the cigarettes, his coming home after all those rounds, those deliveries'

'The playful, enchanting contiguities of Irish poet Carson's memoir (which is as much a portrait of the city of Belfast as it is of one of its denizens) are just as skilled as those in Nabokov's standard, <i>Speak, Memory</i>, and are even somewhat bolder ... Among the flood of Irish memoirs these days, none are as dazzlingly written as this, and none remain so solidly entrenched in the sovereign space of the imagination'

'A whimsical, witty romp through the streets of Belfast ... While the tone of most of the book is lighthearted (as when Carson reveals to us the titles of the books he keeps in his privy), there are also more serious undertones of violence and the IRA – mentioned only occasionally and always in passing when referring to some local landmark. Violence for Carson is just one part of the Belfast landscape – not to be dwelt upon, but not to be ignored. Carson's imaginary 'star factory' – a place where words were melted down and like tallow cast into new molds – is freshly realized here. Beautifully written, with deep humor and a strong evocation of a very personal Belfast'

'There are lots of writers hidden inside in that particular book, you see, waiting for the right readers to become them' 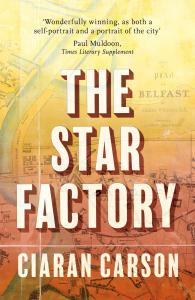 <p>Author has won the <i>Irish Times</i> Irish Literature Prize, been shortlisted for the Irish Book Award and Whitbread Poetry Award, and longlisted for the Man Booker Prize . </p>

<p>A memoir told through the story of Belfast. </p>