<h2>'This is a book of big themes, big ideas and world changing events [...] It's a masterpiece' <i>History of War Magazine</i></h2><p>At the beginning of 1940 Germany was at the pinnacle of its power. By May 1945 Hitler was dead and Germany had suffered a disastrous defeat.</p><p>Hitler had failed to achieve his aim of making Germany a super power and had left her people to cope with the endless shame of the Holocaust.</p><p>In <i>The Hitler Years ~ Disaster 1940-1945</i>, Professor Frank McDonough charts the dramatic change of fortune for the Third Reich, and challenges long-held accounts of the Holocaust and Germany's ultimate defeat.</p><p>Despite Hitler's grand ambitions and the successful early stages of the Third Reich's advances into Europe, Frank McDonough argues that Germany was only ever a middle-ranking power and never truly stood a chance against the combined forces of the Allies.</p><h2>Praise for Frank McDonough: </h2><p>'Superbly scholarly and just as readable' <b>Dan Snow</b></p><p>'<i>The Hitler Years ~ Disaster</i> and its companion volume, <i>The Hitler Years ~ Triumph</i>, are not just informative on a nearly encyclopaedic level, they are well-researched, well-structured, and well-written. What's more, they are relevant and challenging. Through questioning the myths that still exist, they encourage the reader to think in a new way, not just about the past, but about the present and the future' <b><i>Get History</i></b></p><p>'McDonough has provided fascinating insights into the experiences of Germans in a fickle and frightening world' <b><i>The Times</i>, on <i>The Gestapo</i></b></p>

<p>The second volume in a new narrative of the rise and catastrophic fall of the Nazi regime by a respected expert on the Third Reich.</p>

'This book is like a time machine because McDonough writes so vividly [...] One minute you're dining in private with Churchill and Stalin, the next you're watching the Wehrmacht advance and retreat in the east'

'An impressive tome, beautifully presented with a body of illustrations ... McDonough's narrative rattles along, constantly engaging and enlightening and thankfully free from turgid academic jargon ... Rarely has the odious story of the Third Reich been so elegantly presented'

'I have read many books on the period and Frank McDonough's ranks above them all. Bravo'

'McDonough is not content with repeating age-old arguments but seeks to challenge mainstream historiography, bringing into question the real role Hitler played in Nazi Germany'

'An amazing achievement ... If you are going to read one book over the Christmas period or early next year then read this' 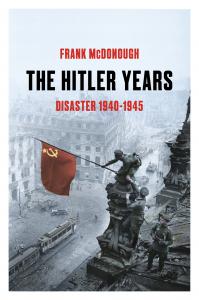 <p>The first narrative-driven history of the Third Reich since the 1960s. </p>

<p>The history of the Third Reich is a source of perennial fascination. </p>