<h2>Their rivalry will change the world forever.</h2><p>As competition for the imperial throne intensifies, Constantine and Maxentius realise their childhood friendship cannot last. Each man struggles to control their respective quadrant of empire, battered by currents of politics, religion and personal tragedy, threatened by barbarian forces and enemies within.</p><p>With their positions becoming at once stronger and more troubled, the strained threads of their friendship begin to unravel. Unfortunate words and misunderstandings finally sever their ties, leaving them as bitter opponents in the greatest game of all, with the throne of Rome the prize.</p><p>It is a matter that can only be settled by outright war...</p><p>'A page turner from beginning to end ... A damn fine read' Ben Kane, author of <i>Lionheart</i> (on <i>Sons of Rome</i>)</p><p>'The Rise of Emperors series is first-rate Roman fiction. Doherty and Turney each breathe life into their respective characters with insight and humanity' Matthew Harffy, author of <i>Wolf of Wessex</i></p><p>'A nuanced portrait of an intriguing emperor' <i>The Times</i> (on Turney's <i>Commodus</i>)</p><p>'A meticulously researched and vivid reimagining of an almost forgotten civilisation' Douglas Jackson, author of <i>Hero of Rome</i> (on Doherty's <i>Empires of Bronze</i>)</p><p>'An intriguing and highly polished piece of historical fiction' James Tivendale from <i>Grimdark</i> (on <i>Sons of Rome</i>)</p>

<p>The story of Constantine and Maxentius, two ambitious young men, two brilliant generals, two friends destined to fight to the death as they strive to become Emperor of Rome. The second instalment of the trilogy.</p>

'A page turner from beginning to end ... A damn fine read'

'The Rise of Emperors series is first-rate Roman fiction'

'I am in awe of the skill of both authors to bring something as complex as this period to life with such apparent ease ... Each chapter flows into the next, the desire to give both characters an equal voice never falters, and quite frankly, I have no idea how the trilogy is ultimately going to end, but I am desperate to know. I highly recommend <i>Masters of Rome</i>, especially for those who have no knowledge of the period's history (like me) because it is fascinating and told with panache and skill, with an eye to detail. And those who do know the period, you're still in for a treat' 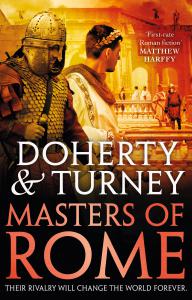 <p>Brings one of the most momentous episodes in European history to life as the series builds towards the infamous battle of the Milvian Bridge.</p>