<h2>The memoirs of senior UK diplomat Sir Peter Westmacott, former ambassador in Turkey, France and the United States during Barack Obama's presidency.</h2><p>'A highly readable account of a glittering diplomatic career' <b>Tony Blair</b></p><p>'One of the most brilliant and consequential diplomats of his generation' <b>Andrew Roberts</b></p><p>'A must-read guide to the crucial role for diplomacy in restoring British influence' <b>Philip Stephens</b></p><p>Urbane, globe-trotting mandarins; polished hosts of ambassadorial gatherings attended by the well-groomed ranks of the international great and good: such is the well-worn image of the career diplomat. But beyond the canapés of familiar caricature, what does a professional diplomat actually do? What are the activities that fill the working day of Her Majesty's Ambassadors around the world?</p><p>Peter Westmacott's forty-year career in the Foreign and Commonwealth Office straddled the last decade of the Cold War and the age of globalization, included spells in pre-revolutionary Iran and the European Commission in Brussels, and culminated in prestigious ambassadorial postings in Ankara, Paris and Washington in the post-9/11 era. As well as offering an engaging account of life in the upper echelons of the diplomatic and political worlds, and often revealing portraits of global leaders such as Blair, Erdogan, Obama and Biden, <i>They Call It Diplomacy</i> mounts a vigorous defence of the continuing relevance of the diplomat in an age of instant communication, social media and special envoys; and details what its author sees as some of the successes of recent British diplomacy.</p>

'Peter Westmacott was one of the most brilliant and consequential diplomats of his generation, rising to the apex of his service. Anyone interested in understanding how international relations work at the highest level should read <i>They Call it Diplomacy</i>'

'Peter Westmacott's engaging memoir, drawing on a Foreign Office career that included the top job in Washington, provides a must-read guide to the crucial role for diplomacy in restoring British influence'

'Westmacott offers a personal memoir of representing Britain as an ambassador, mischievous but also passionate and full of insight, particularly into Turkey, Iran and the US, his final posting ... The strength of Westmacott's account is that as well as shrewd analysis, he gives a vivid sense of how making common cause actually works ... Above all, he makes a powerful case for the kind of diplomatic skills – and deep knowledge of other countries – which he has spent his life honing' 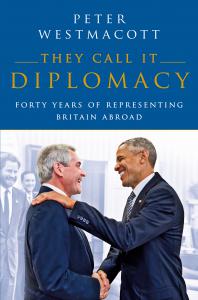 <p>A unique, insider's view of the corridors of power.</p>

<p>Insight into US politics under Obama from British perspective. </p>